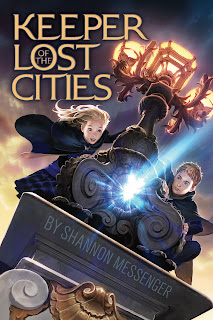 A girl a with special powers, and a strange family, Sophie goes through many tough things in Shannon Messenger’s new – and only – book, Keeper of the Lost Cities. (Her OTHER book, Let the Sky Fall, comes out March 5th, 2013!)
(Here is another place to read about BOTH of Shannon's books!)


When reading this book, you do NOT want to put it down. It’s that riveting, and just plain marvelous. Full of new foods (Shannon, I would love to try mallow melt cake with you), creatures we’ve all heard of (in new ways), and a completely imaginative, new story.
We all have to make decisions in life, but not like Sophie. What would you feel like if some random boy came and told you that your life was about to change forever, that you aren’t who you were raised to be, and whisked you away to some city you were raised to think was a fairy tale? Would you believe him (not to mention that in a girl’s eye he’s INCREDIBLY cute)? What if since you woke up in a hospital at age 5, you could read minds? Sophie gets stuck in that decision.
I DEEPLY recommend this book, so please go and check it out!
Make sure to go to your nearest bookstore (or Amazon or iTunes or whatever)  TODAY, and scope out the store! :)
*Brain Food*
I am weightless, but you can see me. Put me in a bucket, and I'll make it lighter. What am I?

What could be wrong with being a pretty, having a “bubbly” life, partying every night, and – well – being pretty?

Tally (being a new pretty) thinks it’s TOTALLY awesome. But when a blast from Tally’s ugly past shows up into her pretty life, everything goes wrong.
She gets a note from someone close to her that was written before she was a “bubbly” pretty. And she wrote it, to help cure … the bad news about being pretty. (I KNEW there was something messed up about a world where everyone has self-esteem issues!)  Tally must decide. Is the society lying about the over-the-top operations? Or are the telling the truth?
Full of back-stabbing, romance, and a twist you’ll never forget, Pretties is one the best books I’ve EVER read, and I highly recommend it.

*brain food*
I have holes in my top and bottom, my left and right, and in the middle. But I still hold water. What am I?

A Pretty Series, With an Ugly Title

What could be wrong with everyone being super-model gorgeous?
Everything.
Last Friday, I started a fantastic book called Uglies, by Scott Westerfeld. It’s in the point of view of a tricky “ugly” named Tally.
What is an ugly? In Scott’s world, the stages of growing are... unique.
·         First, you’re a littlie
·         Then, you’re an ugly
·         A pretty
·         A middle pretty
·         A little pretty
·         And a dead pretty
Tally, is (obviously) an ugly in this book. She misses her best friend, Peris, and sneaks into the place where pretties live, it’s called New Pretty Town. Uglies aren’t supposed to go there, though, but pretties CAN go into Uglyville, even though they never do.
That’s when Tally Youngblood meets Shay, another Ugly, but Shay doesn’t want to become pretty like Shay does. She would much rather STAY ugly.
Shay takes Tally on an amazing - and strange - adventure to new places, and new, pretty thoughts.
*brain food*
What gets wetter and wetter the more it dries?
~~Middle Grade Madi~~
Posted by Madi MacNish at 6:00 AM 19 comments:

I finished the Vladimir Tod series, by Heather Brewer about a week ago. Can I tell you a secret about it? AMAZING!
And do you know what you should do RIGHT NOW? GO and GET it!
Vladimir Tod starts off as an 8th grader in a town called Bathory. He’s got a secret, a blood filled, crazy secret. He’s a vampire, but a human too.
During this series, Vlad lives with his “aunt”, Nelly due to a death of his parents – Thomas and Melina Tod – when Vlad was 9. He has to decide, are humans more than just something vampires suck on, like his dad? Or, is he really one of them; his mom, his aunt, all the kids he goes to school with (the girl he's had a crush on since grade 3), and his best friend, Henry.
But, there’s another series too. (I haven’t read it yet, my school doesn’t have it) It’s in the point of view of Joss, Vlad’s vampire slayer friend. It’s called the Slayer Chronicles! If it’s as good as Vlad’s story, it ought to be something to check out!
HERE is the blog for Heather. It has both Vlad’s story and his friend, Joss.
*Brain Food*
I fly, yet I have no wings. I cry, yet I have no eyes. Darkness follows me; lower light I never see.
~~Middle Grade Madi~~
Posted by Madi MacNish at 2:38 PM 8 comments:

Interviews - Check It Out!

The other day, my dad said that he got an interview I need to fill out from one of his blogger friend, and it will be online in a couple hours. So, make sure to check it out! It's at Literary Rambles, with Natalie Aguirre, which he said is a pretty big deal.


Brain food! :)
I'm the part of the bird that's not in the sky. I can swim in the ocean and yet remain dry. What am I?


~~Middle Grade Madi~~
p.s. My review of Shannon Messenger's Keeper of the Lost Cites will (hopefully) be up soon. I finally started middle school, and I've been super busy!
Posted by Madi MacNish at 3:00 AM 6 comments:

First Impressions - Keeper of the Lost Cities, by Shannon Messenger. 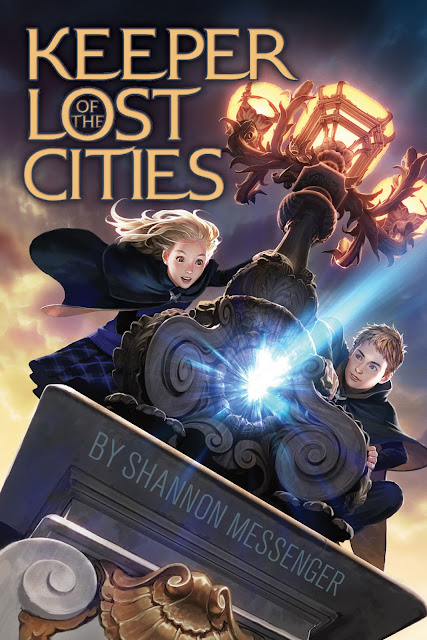 I came home from Boston and my dad had gotten a box - full of books - that was delivered while we were gone. It came from his friend, Kristen Pelfrey, who is a teacher taking part in a revolution of reading (my dad told me to write that, I'm not sure what it is) and sent us a bunch of ARCs she picked up at something called ALA. I think she's awesome, because I've been wanting to read Shannon's book since she started recommending all my favorite MG books!

Shannon Messenger's book (comes out October 2nd),  Keeper of the Lost Cities, was in the box, obviously. The cover was very interesting. It was also a book my dad told me I should try to read. So I opened to the first page, and my jaw dropped in love.
I was telling my dad about it today, "Dad, this book so good! I honestly love it more than I first loved Hunger Games and Harry Potter!"


He was shocked, considering I have been OBSESSED with both books since I read them.
I'm about 5 chapters in right now, but I still am excited to read the rest, since it has such an excellent beginning.
My dad says I shouldn't talk about the parts I've read, because the book isn't published quite yet. :O - but, he did say if I talked about the first page and why it made me fall in love with the book that would be okay.
He was explaining to me that the first page is a REALLY important part of a book, because it makes a HUGE difference to a reader when they're deciding whether they're going to love a book or not.
The book begins with a preface, which apparently is like a prologue (but not EXACTLY). When I read the page, I fell right into Sophie's surroundings.
The opening is as written:
Blurry, fractured memories swam through Sophie's mind, but she couldn't piece them together. She tried opening her eyes and found only darkness. Something rough pressed against her wrists and ankles, refusing to let her move.
A wave of cold rushed through her as the horrifying realization dawned.
She was a hostage [dad said I had to write: emphasis added here, because this line in in italics in the book].
Didn't you love that as much as I did? The way it makes you shiver as you read it, isn't it a rush? In the beginning, Sophie is only a year older than me, and is going through some special things (I won't tell you, but you should read it on October 2nd to find out what it is). Reading about her in this situation is terrifying, because someone could easily hold a kid my age "hostage."
October 2nd should defiantly be on your calender as, "Go to Barnes & Nobles to get Keeper of the Lost Cities!" You won't regret it.
My dad says I should put links up to people when I post about their books. So here's where you can find Shannon:
Her Blog
At her Publisher
On Amazon
On Twitter
On Facebook
On Goodreads
*Brain Food*
What can run but never walks, has a mouth but never talks, has a head but never weeps, has a bed but never sleeps?
~~Middle Grade Madi~~
Posted by Madi MacNish at 2:00 PM 31 comments:

Every Soul A Star Weekly.

I looked through all the books on my bookshelf the other day, and found a book that I meant to read a long time ago. I really wanted to read this so I did! It is really good! You should read it as well!
1: Ally
Ally described where she lives, how it is in the middle of nowhere. How she has no friends, because she is in the middle of nowhere. She tells us she is home-schooled.
2: Bree
Bree, a snobby, stuck-up, 13-year-old-girl, spends a chapter describing how she was OBVIOUSLY switched at birth. Why? Her parents are physicists, her sister gets strait A's, and she's "gorgeous." She works at Let's Make Up at her local mall. She explains how she has a "Very important position" being the "junior consultant." She also explains that she can't get eat junk food, because "it would go strait to my thighs," and she does sit-ups every night before bed. I don't think there has ever been such a stuck-up character! I hope this changes!
3: Jack
Jack tells the readers how his mother hates his father, and cuts off all of the heads in pictures. He pretty much tells us how he fails at everything, and cannot beat his brother at anything. He says all he want to do is read fiction and Sci-Fi, draw aliens, monsters, and wizards. He says he want to converse his energy so when everyone else is sleeping and dreaming their normal dreams, he can do something that most others can't.
He can fly.
Brain Food
What goes around the world, but stays in a corner?